Like, my husband and I are, like, totally adults and stuff.
I know this because we, like, totally did some toilet DIY like a boss! Bosses? Whatever. Shut up grammar nazis... go be mean somewhere else. 😆

Our basement toilet has been leaking; a fact we knew since our home inspection.
Of course this is a simple (so to speak) fix of changing of the wax seal.
HOWEVER...
While looking at removing the toilet, we realized that there wasn't a shut off valve at the toilet. This is very strange. 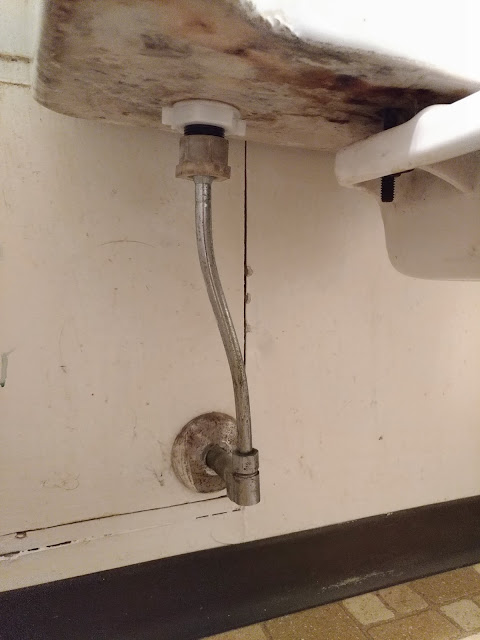 So, we had to shut off the main valve and install a valve. Then, we turned on all other basement faucets to relieve the water pressure before beginning. 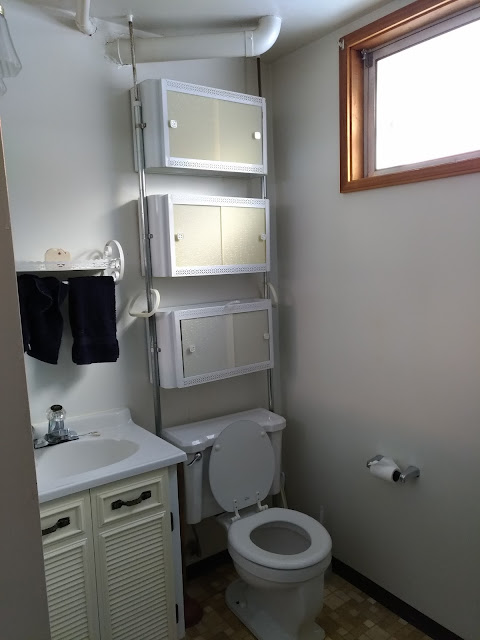 After some research, we realized that adding a shut off valve was pretty easy: I bought a quarter turn valve and a flexible supply hose. We removed the rigid supply from the bottom of the toilet and added the new valve and the new hose. 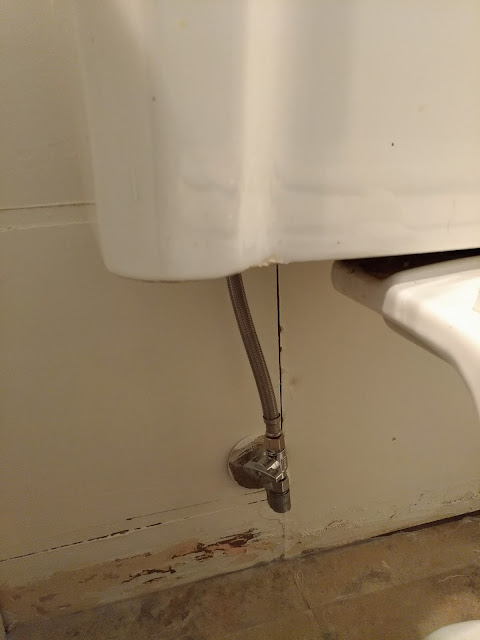 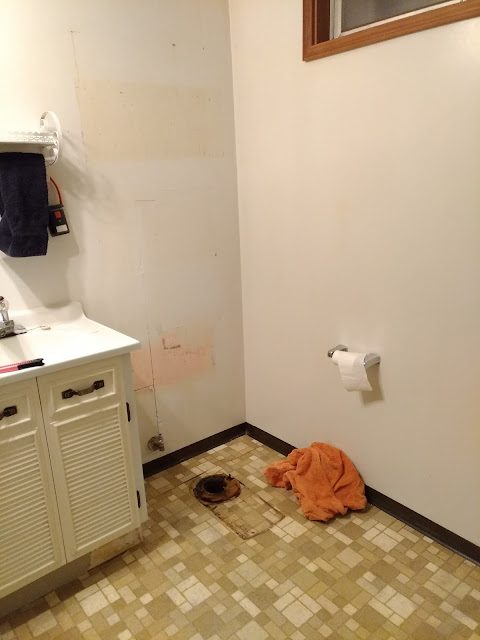 Next, we used a putty knife to scrape away the existing wax seal - there was virtually none on the back side of the flange, hence, the leaking we've been experiencing.
Also, apparently this room was a terrible shade of pink, once. 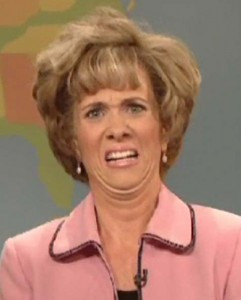 I mean, don't get me wrong... if it was a super pale/chic shade of pink (almost a neutral), I'd be all over it, but this is Pepto-pink and it is bad. 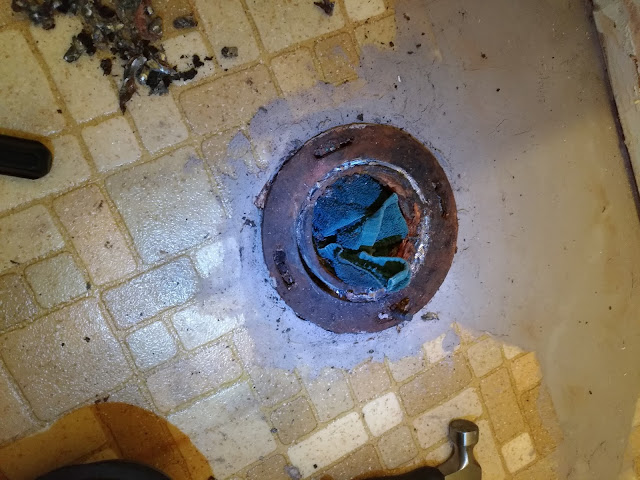 Upon closer examination, it turns out that the flange is very old. A broken toilet bolt wouldn't normally be a huge problem, but being that the flange is so old, there is no way to get the broken bolt out or a new bolt in (no keyhole).

Well, I guess this job just got a bit more involved. More research; we found that the cast iron flanges are put around the cast iron pipe using oiled hemp and then molten lead poured into it. In the photo above, you can see the shiny silver lead that my husband started chipping away at, eventually using a drill to quicken the process. 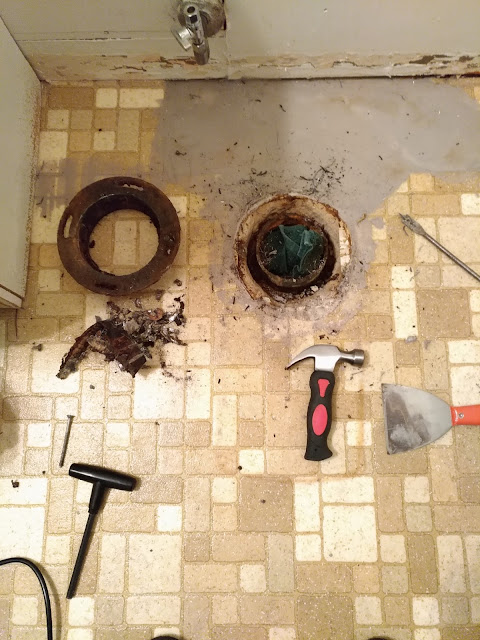 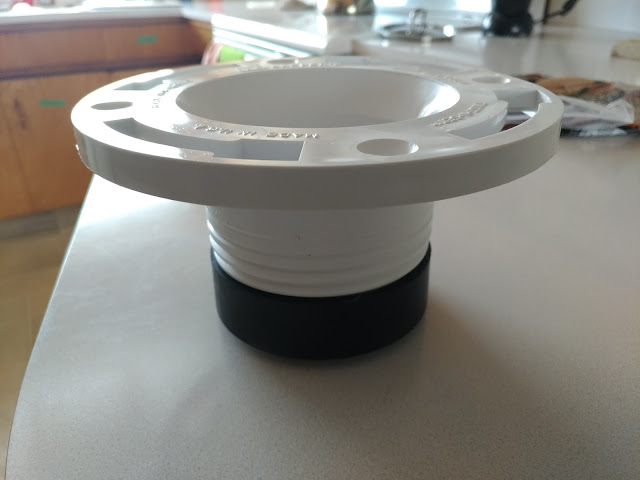 We chose a twist and seal replacement - it goes into the cast iron pipe by twisting until sealed. Weird. 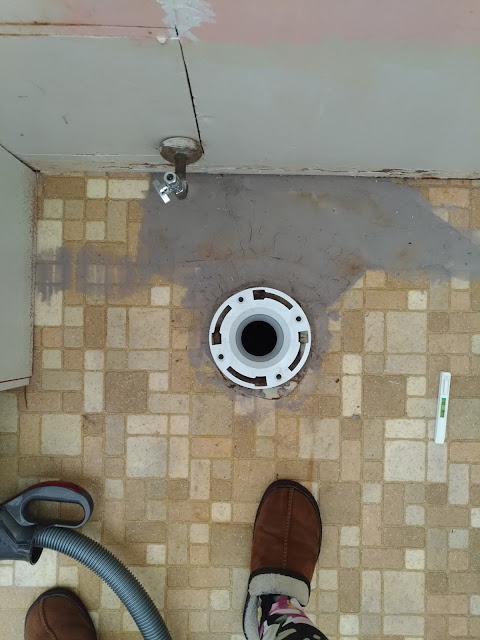 Finally, the new wax seal went on, and the toilet reinstated.

As nothing is quite that easy, it turns out the toilet needs to be shimmed/leveled. Aww crap.
(Ha... see what I did there. I'm so punny.)
I guess you will have to wait to see the toilet in the next post: Bathroom Reveal.

Like I said, we are adulting so hard right now. To see the reveal, Click Here.
Posted by Pat Wheele at 8:43 pm