We had a perfectly serviceable fence… well if you leave out the part that it was only 30’ long, and the back yard stretches for about 50’, so it keeps nothing in or out… and if you leave out the fact that chain-link is uglier than sin. Also, lets not mention that there are 6 other poles that are in the ground that hold no fence at all; an unfinished project, perhaps? Or maybe a fence that had been removed? I dunno. Either way, it doesn't match the wood lattice fence on the other side of the yard. Nor do the two connect along the back. 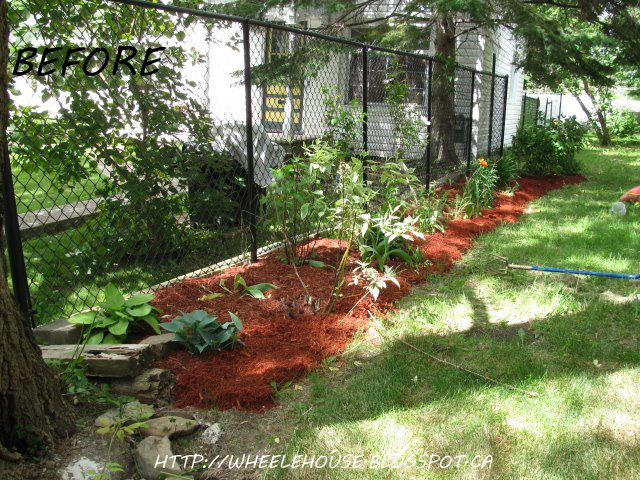 Okay, so the moral of this story is that I have no idea why the heck there is a useless ugly chain link fence in our yard.

What I really want is a fence to keep our wee Grey dog from wandering off when we are in the backyard with him. He is a bit of an explorer – a fact that has caused us several frantic searches for the small one.

Criteria:
-Keep Grey in
-Match the aesthetic of the house
-Avoid blocking the views or creating barriers

We finally settled on the idea of the classic white picket fence. It has 4” gaps, so we aren’t cutting ourselves off from the world; it is only 36”-48” high, so the fence won’t block the neighbour’s window; and it absolutely matches the historic feel of the house. 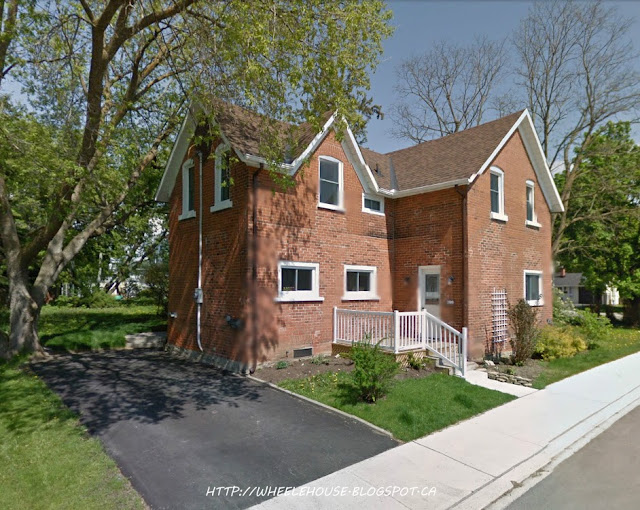 Just to remind you what our house looks like; this is a photo from just before we moved in - taken from Google Map street view - hence the crappy quality. I guess I should really get my butt in gear to take some more photos! 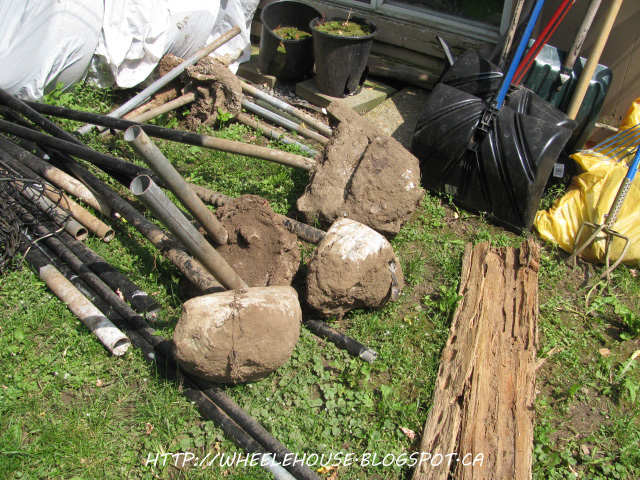 The first step was to get rid of the chain-link fence.
The posts were held up using concrete footings, so getting them out was a bit of a challenge sometimes. 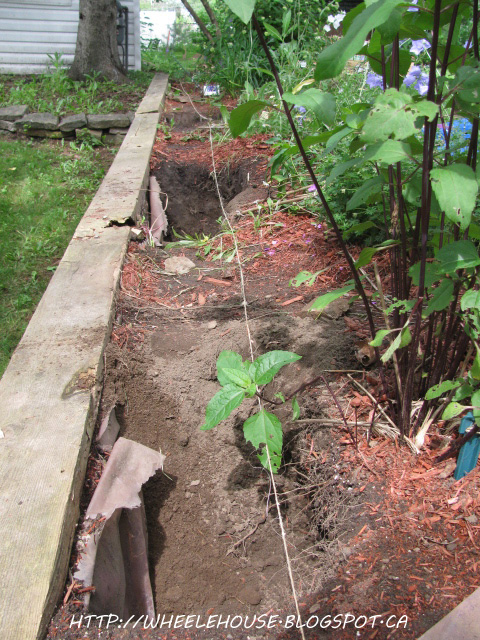 Luckily, my nephew, David, was here for a visit, so he helped Hubby pull up the posts.
This also, did nothing for the state of my garden. One step forward, two steps back... Oi. 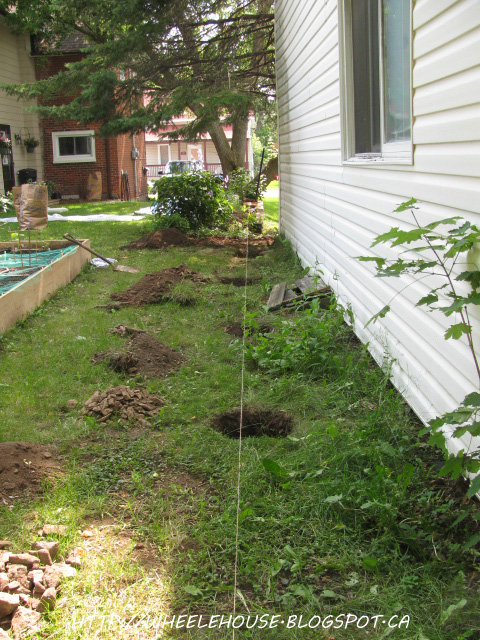 Digging new holes proved to be quite the challenge. We live on the Canadian Shield so rock is common-place. In fact, most old homes here in Carleton Place have crawl spaces rather than basements, because the rock is too hard to dig. Our crawl space allows for only 36 inches in depth… making every trip down there an adventure. Luckily both Hubby and I are short. 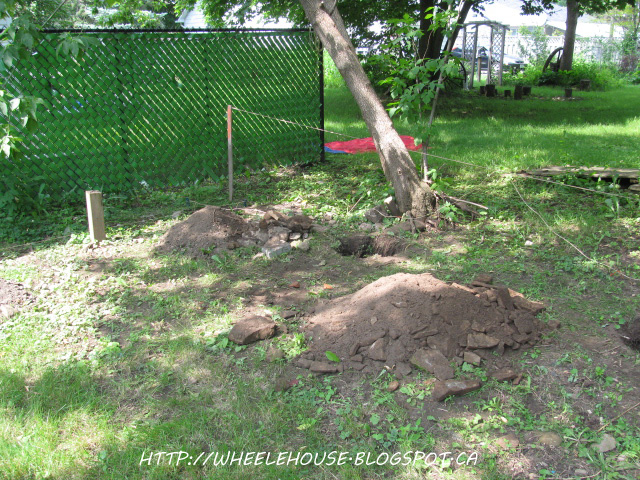 All of that to say… we found a lot of rocks while digging the new holes. Hubby and David had a system going – one would dig, until the rocks got too much, then would move on to the next hole while the other got down with a crowbar and levered the rocks out. 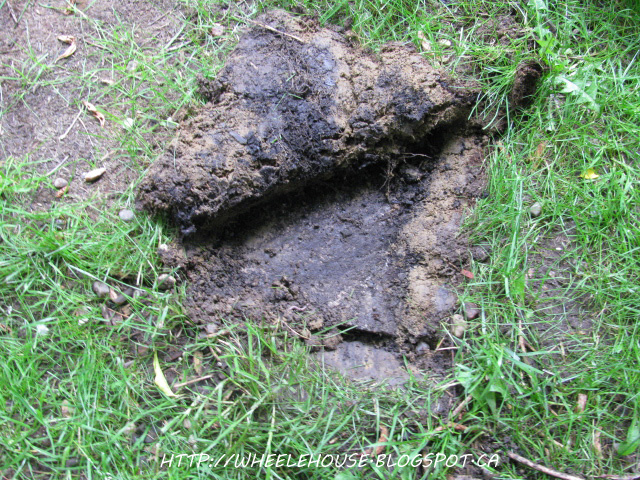 The bigger challenge came at the entrance to the yard. We discovered rock right up at the surface.
A lot of rock... 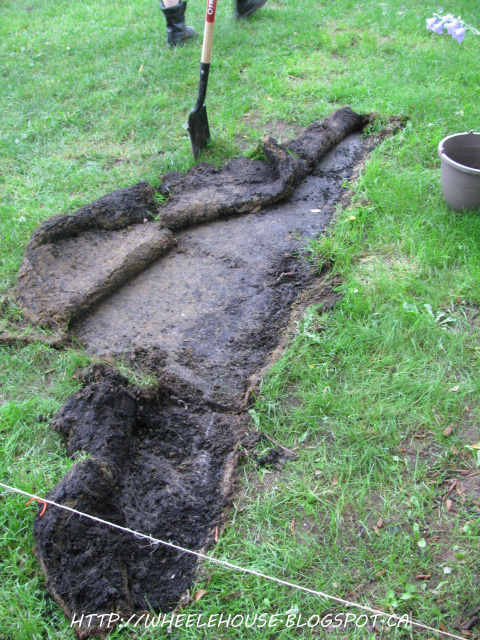 We pulled back the sod – which came up a little easier than it should have – and discovered concrete.
about 6 feet by 8 feet of concrete.

It turns out that the previous owners had poured a large concrete patio. Awesome. (insert sarcasm here) 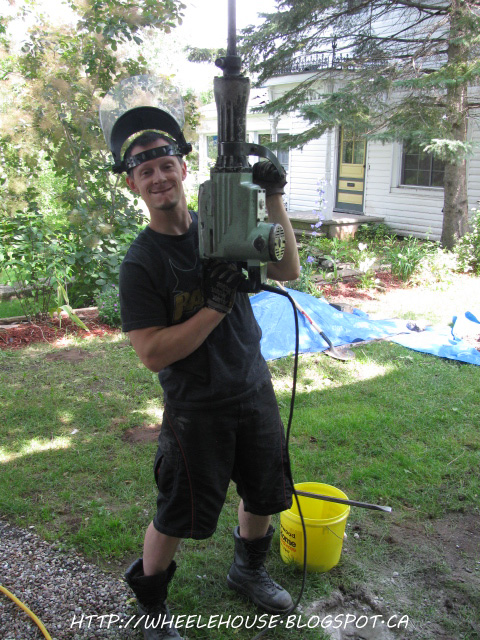 I guess it is time to rent a jack-hammer. Hubby enjoyed that part. 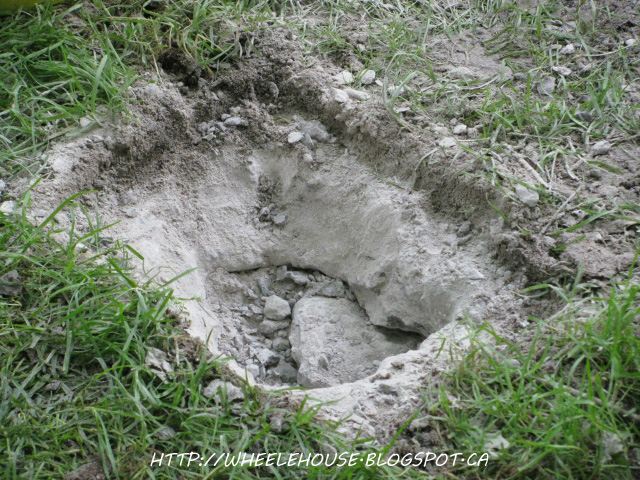 The concrete was a good 4”-5” thick, and it takes so much longer to get through it than you think it should. 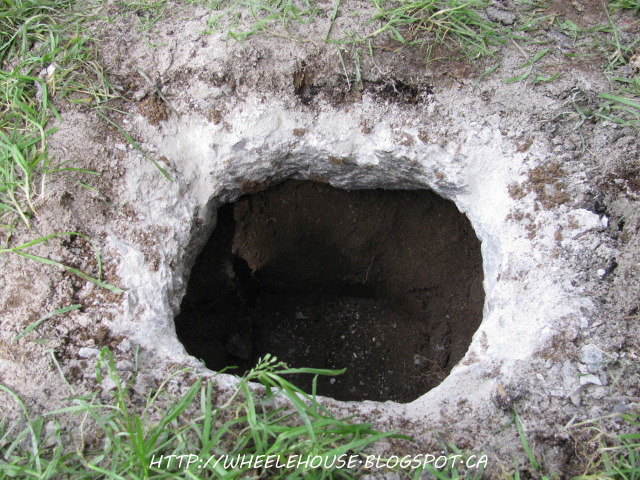 But once through the concrete, the hole digging went pretty easy from there. 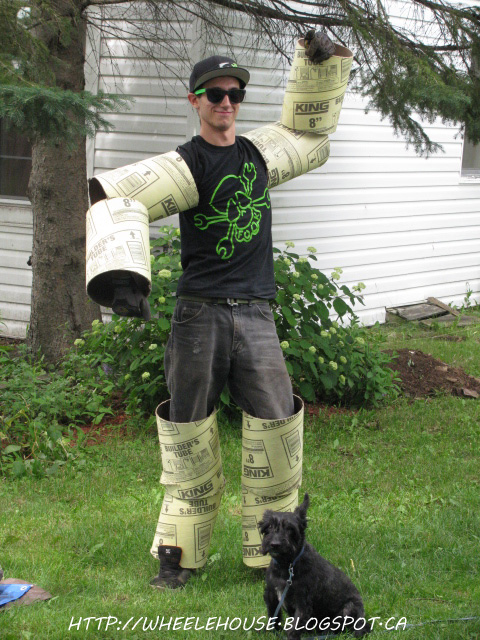 We used 8” forms to put into each hole.

David probably doesn't know, but his pose is reminiscent of the town he was born in – and is Morley & I’s home town. Since the birth of England’s Prince, I am sure more people have accidentally Googled the town of Prince George than ever before. I wonder how many got the image of Mr. PG? Ha! 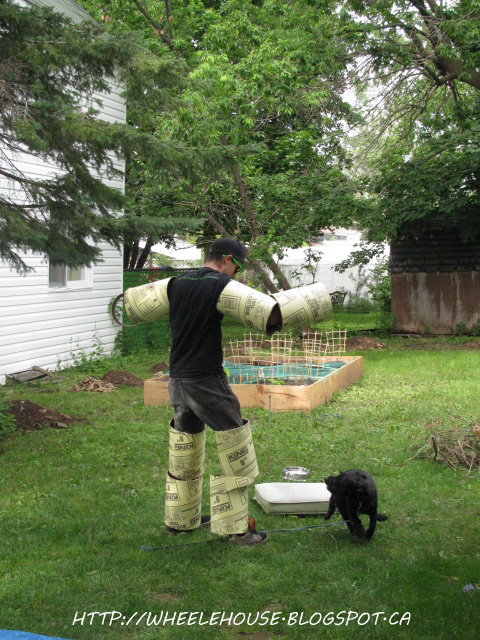 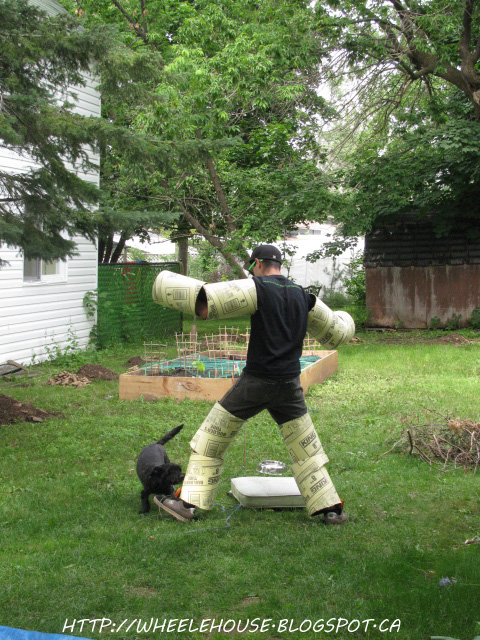 Grey immediately got shark eyes, and was ready to pounce on Dave. I am not sure who won. 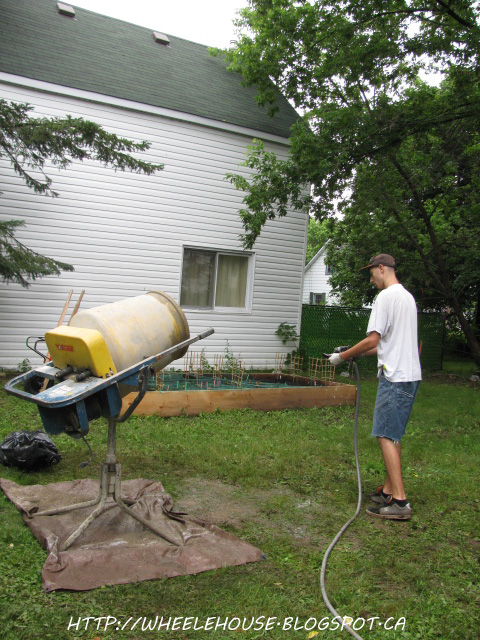 Now time to fill our own post hole forms with concrete. We rented a concrete mixer – and so glad we did, it made the job go so much faster. We filled 26 holes in about 2 hours. 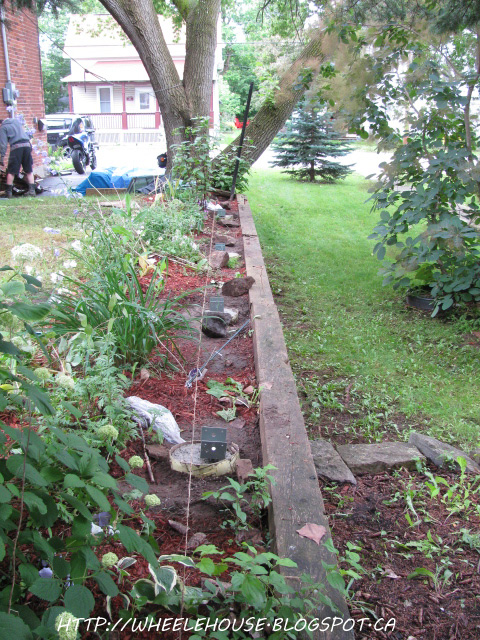 We put in the post brackets because wood fences in CP have a tendency to rot thanks to the humidity in Ontario. 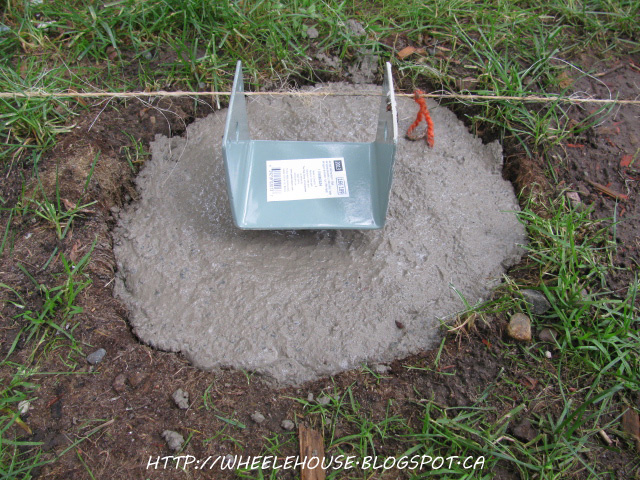 So instead of having to pull out an entire rotten post plus the concrete footing, we figured a post bracket would make a lot more sense for the future.

That is all I have for you today.