I present to you, the beautiful and majestic Imperial Theatre! 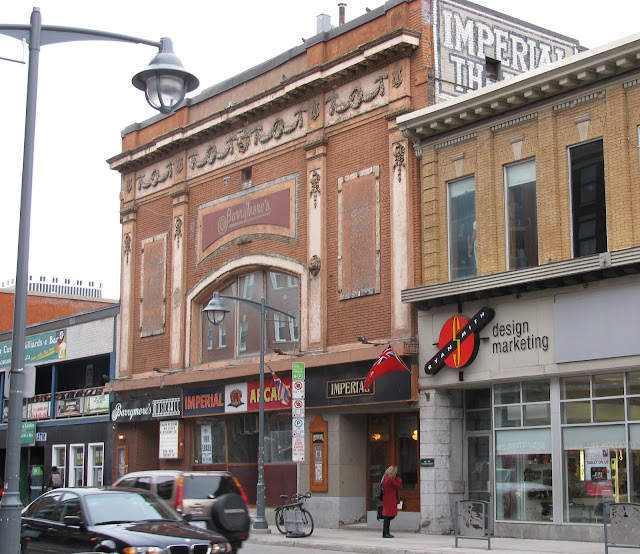 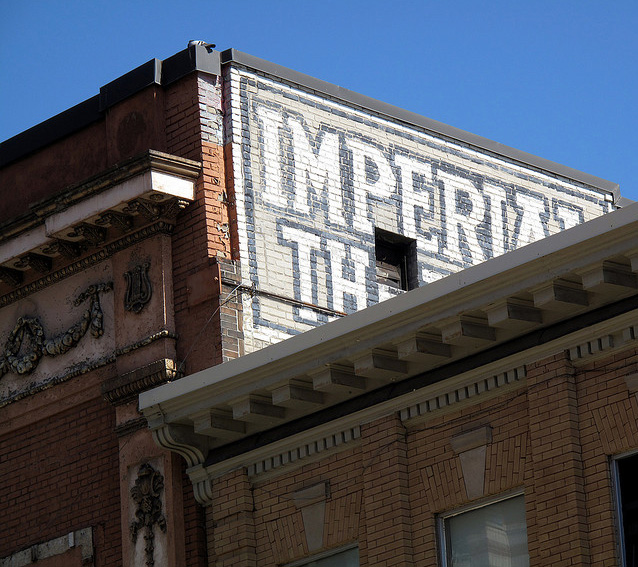 But you can still see hints of its former glory in the Imperial Theatre sign painted on its side...
So how did it get this way?
I present to you, 'History With Pat!' 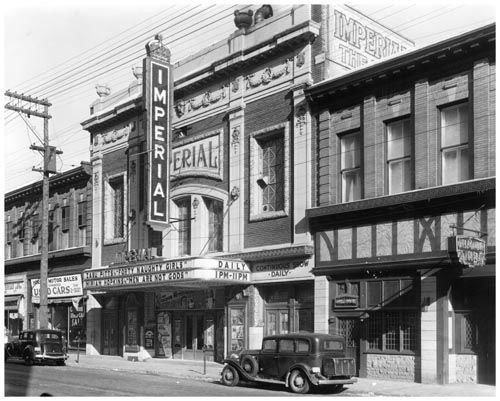 Barrymore’s Music Hall now occupies 329 Bank Street in Ottawa, Ontario. Despite the weathered and worn look of the building today, its origins were very exciting for the city.

The Imperial Theatre opened on Monday, August 24th, 1914 to great fanfare. Searchlights lit up the sky on the opening night. The following morning, the Ottawa Journal noted, “Nothing has been withheld to make the Imperial Theatre truly metropolitan in all its appointments – both the interior and exterior presenting so unusually attractive appearance.” (Ottawa Evening Journal, 1914) 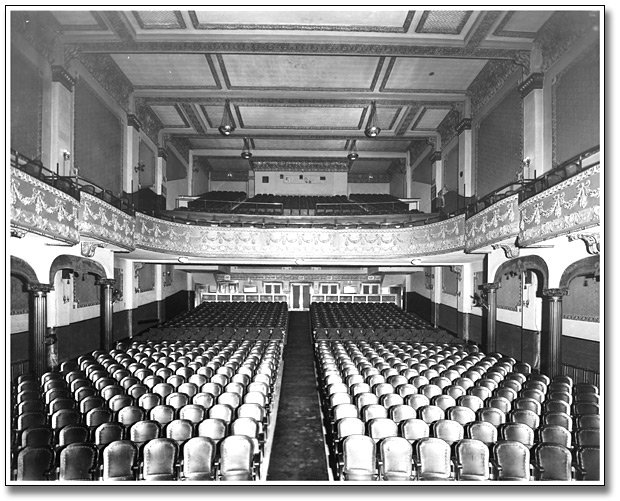 In fact, the Imperial Theatre was billed as ‘Canada’s most gorgeous’ (Miguelez, 2004). “The Imperial in Ottawa probably gets the finest balcony crowd of any theatre in Canada. In other words, a good class of people seek the upper floor of this house. One reason for this is that there are padded opera seats right to the back row.” (Canadian Moving Picture Digest, 1918) 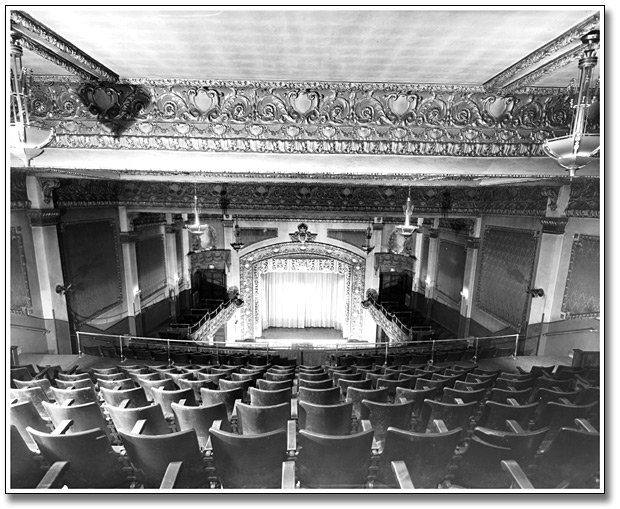 Harry Brouse was the man behind the Imperial Theatre. He built other theatres in the Ottawa-Gatineau area and was an astute exhibitor and businessman (Miguelez, 2004). Brouse was affiliated with United Motion Pictures in order to ensure a supply of films that would pack his theatres. 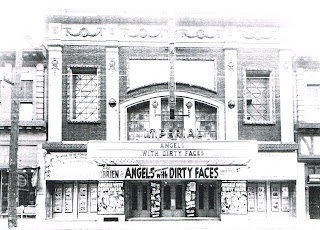 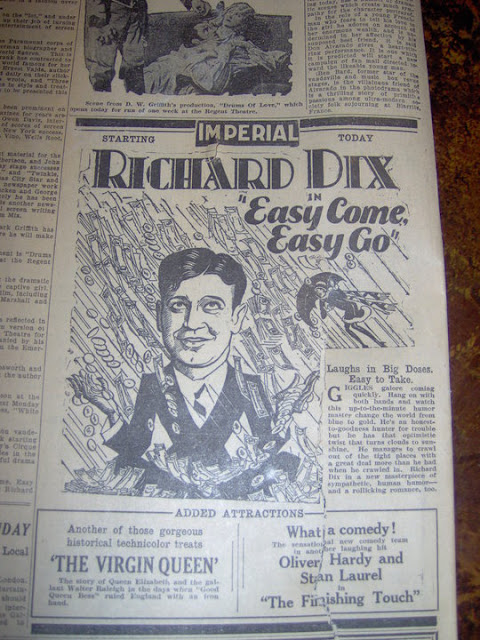 The End of the ‘Imp’
Television became popular after the war, and theatres in the city began to suffer. The Imperial Theatre was no exception. By the mid 1950s, ‘Canada’s Theatre Beautiful’ was quickly falling into poor condition. Also, the theatre had originally housed 1200 guests, now only held 999 people. The final day for the Imperial Theatre came quietly. Johnny Dark was the last screening on October 15, 1955. A sign on the door said closed until further notice (Miguelez, 2004). 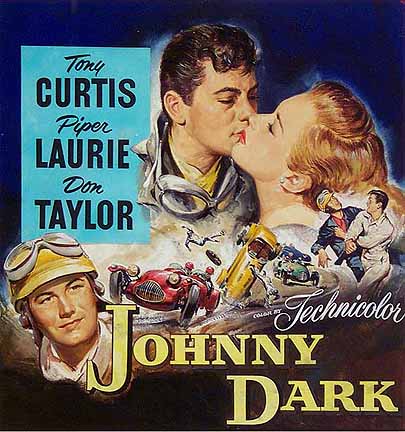 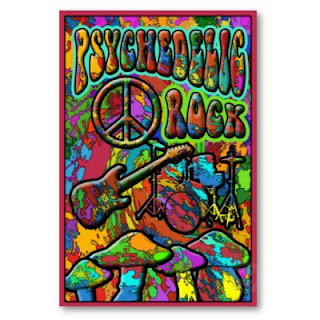 In 1970, 329 Bank would become the ‘Opera’, a psychedelic rock ‘n’ roll palace. The space reflected this new tenant with its psychedelic murals. Unfortunately, the Opera would not last, and instead became a burlesque cabaret house named Pandora’s Box. Bob Werba from New York opened Pandora’s Box and billed it as “Canada’s Biggest and Best Live Nude Show”. 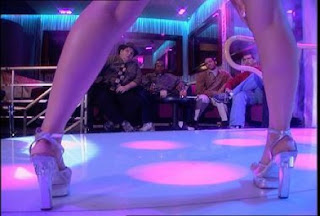 Ottawa being a conservative city had to compete with Hull establishments that had longer hours. Rumours of an unsavoury upstairs massage parlour finally brought the establishment to an end on September 14, 1977. Being the entrepreneur that he was, Werba instead turned the building into a discotheque and named it after a well-known theatrical family to “recapture a connection with the building’s past” (Miguelez, 2004, p. 119). 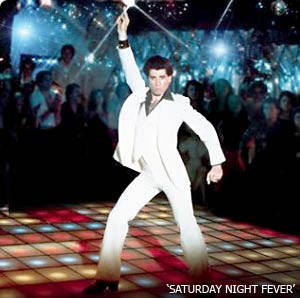 As a discotheque, Werba spared no expense, even installing the original illuminated dance floor from the movie Saturday Night Fever. The psychedelic murals were painted over and the gold trim ornamentation was restored. Top chefs were hired to prepare food to the patrons, as per local liquor laws. In its first days, Barrymore’s would have been a sight to behold. Within a couple of years, the musical genre of disco began to die, and Barrymore’s started booking live bands instead. During the 1980s Barrymore’s saw some of the biggest bands in the world, including U2, Tina Turner, and Bryan Adams.

Through the 1990s, Barrymore’s continued to thrive. In recent years, however, the live bands that had been a staple for Barrymore’s, are no longer being booked, and the bar is primarily a dance club with theme nights to draw a crowd. 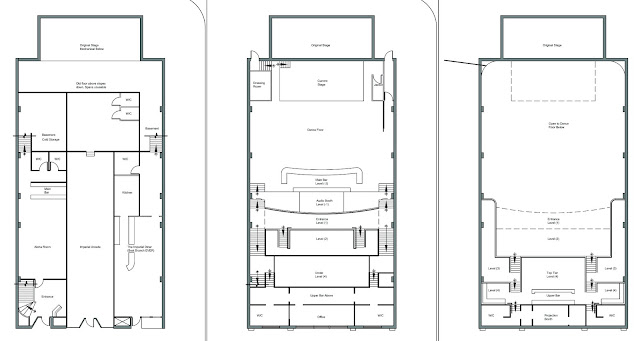 As you can see, the Imperial Theatre was dissected into separate parts. The night club takes up the full upstairs. The lower level was further split into three: the Aloha Room on the left; the Imperial Arcade in the centre; and the Imperial Restaurant on the right. Sadly, the arcade has not been open in years, the Aloha Room succumbed a couple of years ago, and most recently, the Imperial restaurant has closed its doors as well. I know my friend NMC is devastated to not get her vegan brunch anymore. Sad face.

Anyway, I my first .gif showing the Imperial's change:

Back when I was in school, as part of my Preservation & Adaptive Reuse class, I picked Barrymore's to be my project. This was my plan:

Concept
The detail work on the ceiling of Barrymore’s remains, but the poor upkeep of everything else makes turning it back into the Barrymore’s of the 1970s a less than desirable option. Instead, re-instating the Imperial Theatre is the most appealing option. The area is up and coming, and could use a theatre. Success for the Great Canadian Theatre Company and the National Arts Centre prove that the city can handle a little more culture. 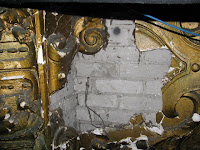 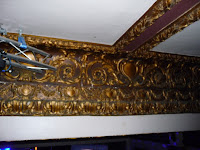 Putting the elegance back into 329 Bank Street will be quite a challenge, and Ontario Building Codes (OBC) dictate some major changes from the original Imperial Theatre plan, however, the space coul still house over 450 patrons in the same stylish experience that the original customers had enjoyed. The original colour scheme of cream, ivory, purple, and gold will be respected as well walnut wood used wherever possible. 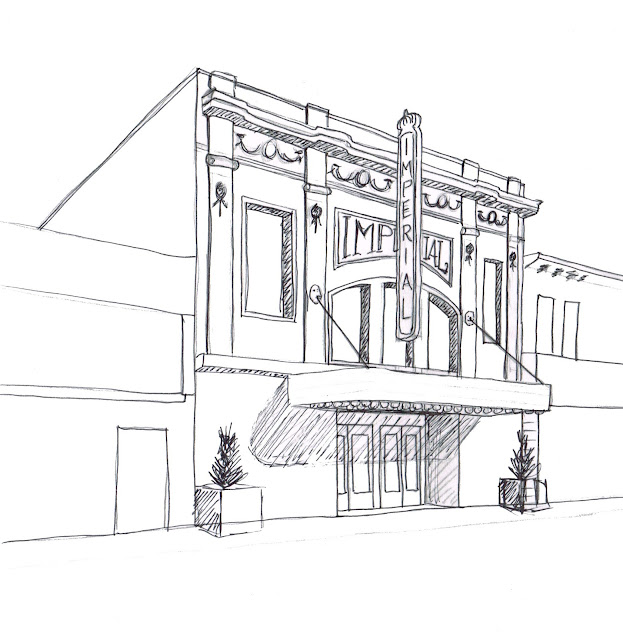 Exterior
The exterior will need to be repaired, obviously. The brick facade is in tolerable shape, but the mortar should be inspected and repaired where necessary. The central curved windows will be reinstated with leaden glass windows. The division between the three windows will be restored as well. The two windows flanking the central windows are likely still there. Removing the plywood from them, and repairing what is left is an important stage as it will help bring light to the new staircase going in. Concrete lanterns used to top the cornice and will be re-created and put back to help illuminate the facade as it should be. The original crowned Imperial sign as well as the canopy are long gone, but by examining the photos and other theatres of the time, it will not be difficult to recreate them. One of the two lion heads that held the canopy chains is still there and will serve as the mould for re-creating the other. 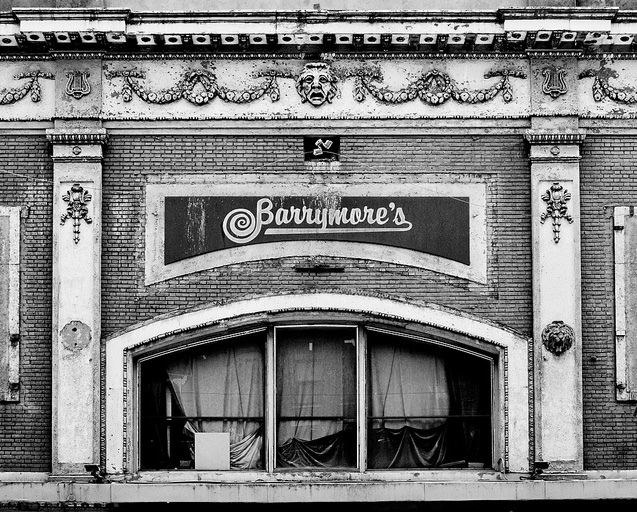 The painted Imperial Theatre sign remains on the south side of the building, and will continue to survive. The original sign on the front of the building is very likely still there under the current plywood Barrymore’s sign, however, the plaster frame around it, and the window below, is gone. Again, consulting photographs will aid in re-creating this embellishment. Lastly, the original walnut doors that were designed by W.C Edwards and Co. are gone. In order to have a workable entrance that abides by Ontario Building Code rules and follows ADA guidelines, the doors will be put down to the sidewalk for easy entrance. 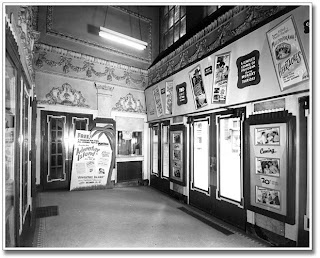 Only two doors double doors will fit in the current space, versus the original three double doors that originally existed. Accessible water closets and new staircases will take up the space that the flanking doors once did. Using the Chateau Laurier as an example for the doors, the original W.C. Edwards doors may be replicated (Corber & Smith, 1991). 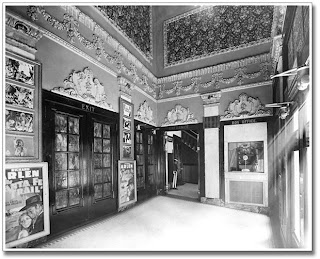 Entrance Lobby
As mentioned, the water closets and stair case will take up most of the space in the entrance lobby. A double lobby will be built to handle to sound issues related to people entering and exiting the building and the orchestra floor. In the second lobby, a small walnut bar will be set up for intermission. Several seats will be sacrificed for the additional space required to allow for OBC requirements, and for the second lobby space. 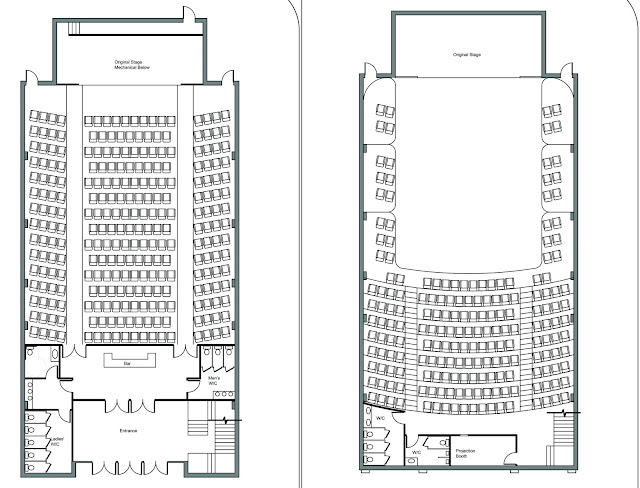 Orchestra Floor
Much of the original detail work on the walls of what is now the Aloha Room, Imperial Arcade, and Imperial Diner, is damaged or missing altogether. Whatever can be restored will be, and what cannot will be re-produced. The level floor will be removed and the original floor will be stripped and re-finished and re-carpeted. 263 opera style seats will be re-instated in warm purple velvet. 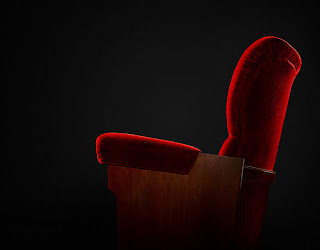 Balcony
The balcony will also be re-instated by removing the boxy millwork that makes up the upper tiers of Barrymore’s. The poured concrete dance floor will be eliminated to reveal the open orchestra floor below. All walls and stages that are in Barrymore’s currently will be removed. The only walls left intact will be the exterior walls and the projection room. 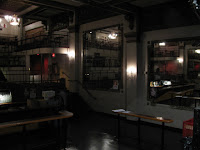 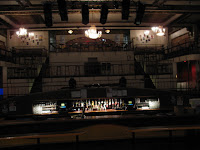 Much construction and re-invention will happen in the balcony sections. The balcony first needs to be re-introduced with 194 opera style seating that match that of the orchestra floor. The front box seating will be rebuilt and embellishment designed that would match the style of the rest of the theatre. Three boxes on either side of the theatre will step down until they reach the current evacuation doors that flank either side of the stage. Stylish supports will need to be created under the box seats. Frames that now hold mirror will be fitted with padded heirloom fabric instead. This is a necessity for the acoustics of the space whether for live theatre or for cinema. Most of the frames are still there and in one piece and can be used as molds for those that are missing or damaged. 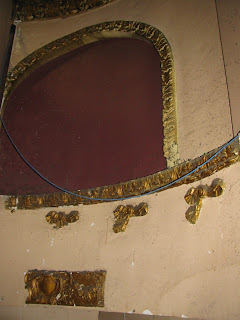 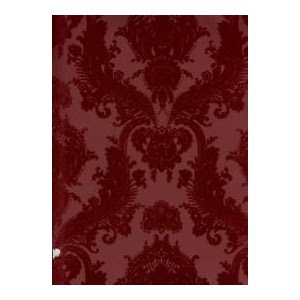 Curved portions above the emergency doors still exist, but are also missing some of their original plaster adornment. That will be remedied and curtain will be placed within them to recreate the elegant look that they once had.


Ceiling
Extensive cleaning and restoration work will be needed for the ceiling. Most of the plaster ornamentation is undamaged, but is in need of some tender loving care. A patina will be left on the gold ornamentation as a reminder of the age and history of the building. The detail is also more evident when contrast or patina is introduced. The detail work on each level of the ceiling is both unique and stunning. It is the crowning jewel of the theatre and will be carefully and sensitively restored to its former glory. 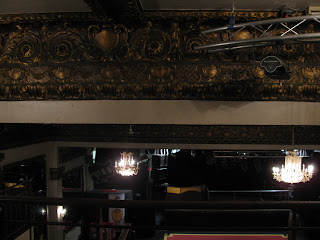 Stage
Being hidden behind a concrete block wall for 40+ years will hopefully have preserved the gorgeous decoration on the proscenium arch and the original wood floor. The wood floor will be stripped and re-finished. At the back of the stage a stair will be placed to take advantage of the emergency door, and to potentially lead to a back stage or under stage dressing room. Wherever the plaster adornment can be restored, it will be. 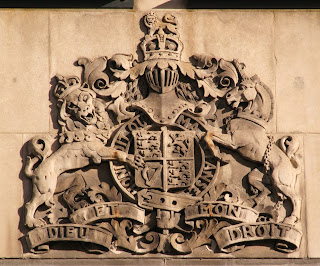 It is feared that the original Canadian coat of arms that topped the middle of the arch has been damaged or completely destroyed. Luckily, the Canadian coat of arms has not changed over the years, so a viable reference point is available. The trickiest part of this restoration will be making use of the new technology so that it does not interfere with the beauty that abounds on the ceiling, but is placed correctly to maximize the theatre performances. Three layers of curtain will be reinstalled to add the same grandeur that the first audiences had the privilege to behold as each curtain pulled back to reveal yet another curtain.

Above is a section of what the Imperial Theatre could look like again one day....
Sure it has less than half the seating that the original did, but due to building codes and the ADA, it just isn't possible! Not to mention, we are just far fatter than we used to be. ;P

Special Thanks: Jeff, Leila & NMC for giving me the low-down on the layout of Barrymore's. Ex-bouncers and ex-clubbers are especially helpful!!